Having seen the basic layout of the application and how the basics of a Component look like, we can work our way up the ranks to create a Pyro Editor.

Copy the top0 folder to top1 and enter it. For example, with:

From inside the app directory create the skeleton for a Component:

If the name of the component to add doesn’t end with Component, it will be automatically added

For small projects/components one can include the html content directly in the component. Let’s generate it automatically:

The generated python code would look like this in each case

The addition of the --htmlsheet has added an attribute with that name which is a literal string in Python. We could then add the content as in:

In both cases the generated component is imported into __init__.py to make it easy available for others to import it.

With our additions (let’s stick to having html content in a separate file), the layout looks like this

Out of curiosity and had we applied the --htmlsheet command line switch, the layout would miss one of the files: pyroes_component.html, because the html content will be inside the component.

Actually, and before editing we are going to define a Pyro. As you may have seen in the layout above, we have added a pyro.py file to the app. Not much is actually needed:

Add pyro.py to the hierarchy (let’s put the --htmlsheet aside for simplicity)

And put some Python in action.

Uhmmm!!! The definition of the attributes is done in a dictionary named bindings (remember it was also auto-generated above for the PyroesComponent) and the class inherits from Model. Quick and dirty explanation

AnPyLar has a built-in implementation of reactive programming following as closely as possible the RxJS/RxPY APIs. The initial set of operations is limited, but it will be expanded over time.

If you don’t know what an Observable is all about Reactive Programming. You may want to see: RxJS or the Python version at: RxPY.

Although this is a NOP (No Operation) class, we will later find several use cases for the observables and the reactive programming.

With a Pyro in the hand, we can now complete the PyroesComponent and the editor with it.

Let’s focus on the specifics of the code parts from above.

We added a binding and this is usable in the directives in the html code.

As much as possible is being rendered with the AnPyLar directives, to avoid rendering in code. (Remember: this is known as htmlista mode). Notice one specific html tag:

As we mentioned before, the name inside Pyro would also have an associated observable name_. You can apply observable operations to the observable like in this case map(lambda x: x.upper()) which will uppercase any text passed to it.

There is some extra magic there:

Notice how we don’t use the Observable when putting the pyd on the screen.

And that’s because the pyd is not going to be edited. It won’t change during the lifecycle of the component. The binding will simply take the current face value and put it once on screen.

For the input field

Once again, we are using the observable and passing it to a supercharged method named _fmtvalue with the * directive syntax, which does the following:

Having a finished PyroesComponent is nice, but it wouldn’t be of any use if we are not starting it. We’ll do that inside our main AppComponent. There are actually different ways of doing it. For the sake of it, we just instantiate it.

Let’s see what our editor delivers. First serve the application:

Which will deliver this.

If we use the backspace key to delete part of the name, this is the result

Blistering barnacles!!! The changes in the input field are automatically propagated to the name displayed above it. All thanks to reactive programming and having it integrated in AnPyLar

PyroesComponent is being instantiated inside AppComponent and as such it is a Sub-Component or Child-Component. There are several properties, but let’s concentrate in this tutorial in two aspects. 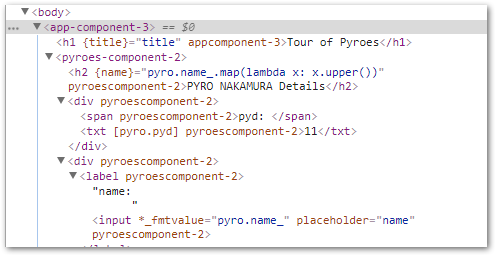 Nothing surprising here: PyroesComponent has generated a <pyroes-component-2> HTML tag and when rendering this has been placed in the DOM as a child of <app-component-3>

The extra -x is calculated each time and depends on class creation order (import order) Never count on it to be fixed, because it won’t be.

As mentioned above, there are different ways to have PyroesComponent render inside the AppComponent. Let’s list them

From a practical point of view, if the file containing the Python code is never imported is just like a text file, with no meaning.

The reactive extensions implementation in AnPyLar has chosen to make certain observables also callables. Specifically those that are created in the bindings directive. As in

which allows later the following

with select
with instantiation
with html

Here the Observable doubles as the callback to which the value will be published when it changes in the input field. This means effectively that:

Although for this short tutorial sample it doesn’t play a big role, it can do so when using it as a callable subscribing to another observable, for example.