Our Pyroes on Tour have already achieved a lot, but there is a drawback: we have a static set of components.

Even if we can dynamically show components, change classes and we could even think of re-rendering a component to be something different, the reality is that we are constrained to the layout we have pre-defined.

In order to overcome this limitation, we need to use routing. The concept is easy:

Copy the top4 folder to top5 and enter it. For example, with:

For the concept there will be:

And the known components

Notice that we will be adding:

Before we define the routes, let’s define (or re-define) the different components. Let’s start with the AppComponent

Our PyroesComponent has also to slightly change to accommodate the fact that:

As we have just seen … there will be named arguments coming to this component. It will obviously need some adaptations. Let’s see the changes

The important part here: the component has direct access to the routing engine with self.router. There is no need to import anything and say anything special. The facility is there.

Having seen how the existing components have been modified, it’s time for the new component. Just as before, we can easily generate the skeleton with (inside the app directory):

And we put some content in the generated files

The Html part is pretty dull, just a placeholder for the rendering that will be done in the Python part, which

Done with the components. But this is about the routing and time to see it. The routing is declared in the main module of the applicaiton: AppModule in the routes directive. But to keep things clean and tidy will be declaring it in a separate module and importing it.

Our app_module.py import AppRouting from app_routing.py and sets it as the value for the routing:

As you may see above, the routes is list (or iterable) of dictionary entries. Let’s try to break the mystery:

If nothing else remains to be matched path: '' redirect to /dashboard. This is the default for the entry path. path_match: 'full' ensures that the matching of path is against the full url and not a remaining url (which could be the case for children routes, which are not in play here)

This says that when the remaining url to be match is dashboard, the component to be put in play in the <router-outlet> is: Dashboardcomponent.

The next entry does the same for pyroes and PyroesComponent

And last but not least is the entry for the Pyro editor.

This one includes a params entry and a dictionary which declares the name of the param to be pyd and which transformation function has to be applied when the query string is read from the url (in this case: string will be converted to int … if possible)

Transforming ensures consistency, be it because of internal routing (an int is probably specified by other components) or because of a pasted url in the browser (which is for sure text at the beginning)

Let’s not forget the pyro_service. Remember that the editor was using a new method named: pyro_service.get_pyro(pyd=xxx). From above:

Just like get_pyroes returns an Observable, so does get_pyro, which filters the Pyroes (recall they are a mock database) for the sought pyd

With all that in place, we can go for it:

Notice also in the picture how the Dashboard navigation button is highlighted. Recall that this is because we specified routerLinkActive

If we click on Pyroes, we are taking to the familiar list of Pyroes and the url in the browser changes to /pyroes

Hitting the browser’s back arrow takes us back to the Dashboard and the forward arrow takes us again to the Pyroes part. All within application, not needed to go the network.

From either the Dashboard or Pyroes just click on the name of a Pyro and let yourself be taken to the editor. 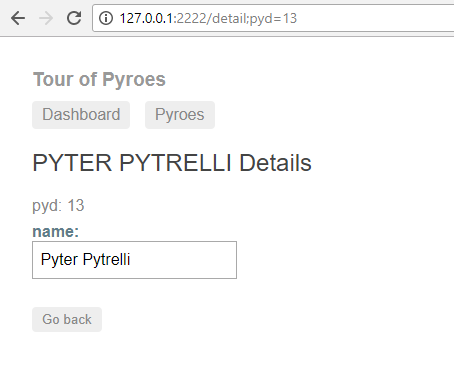 Notice that neither Dashboard nor Pyroes in the navigation buttons are highlighted. And that’s because the current route is neither of those.

Make some changes to the name … 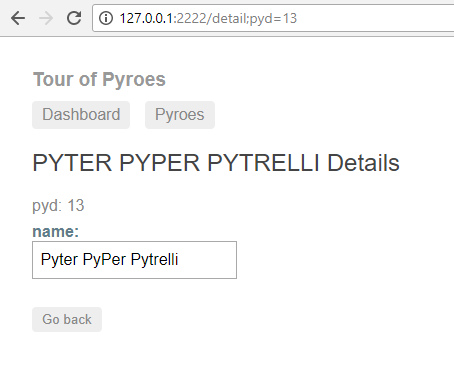 And then choose your path:

Simply play with the navigation. Here we’ll click on Go Back and go back to the Dashboard where the editions are already taken into account

That’s all … it’s about time to go to the network … in the next chapter.